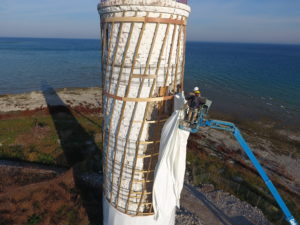 Since the Department of Fisheries and Oceans banding project was completed in 2006, the lighthouse has remained firmly anchored on the shore of Nottawasaga Island, exposed to the ravages of weather, was home to a racoon  and stands lonely and neglected unsure of its fate. Wind driven rain combined with the frequent freeze thaw cycles that have become part of our climate change induced Canadian winters have started to takes its toll on the once proud "Imperial" Tower, shortening further its unknown future and potentially its hopes for a restoration including the reconstruction of the lightkeeper's house.

In the fall of 2016 the Nottawasaga Lighthouse Preservation Society sought to take steps that would mitigate any further degradation of the tower while ownership of the property was obtained and funds were raised for its eventual restoration. Permission was obtained from the Federal Department of Fisheries and Oceans to undertake preservation measures that consisted of wrapping the exterior of the structure in a weather resistant material that would shed rain, snow and other moisture thereby preventing further water penetration to the interior. Prior to the installation of this exterior wrap, loose stone was knocked down allowing the previously installed (2006) bands to be re-tightened to help retain the remaining stonework. A wooden framework was installed to create an airspace between the wrap and tower itself providing a flow of air to dry the interior stonework, thus preventing further damage due to the seasonal freeze thaw cycles previously mentioned.

During the wrapping process, the government hired engineers to complete an extensive structural assessment of the tower. Notwithstanding the sorrowful outward appearance caused by the collapsed stone exterior, the lighthouse was deemed to be structurally sound and perfectly upright with no signs of leaning or other characteristics that would threaten its immediate future. The wrapping work was completed in early December and was done so under extremely trying conditions weather-wise earning NLPS immense and positive recognition for both the government personnel we are working with, as well as, the public at large. 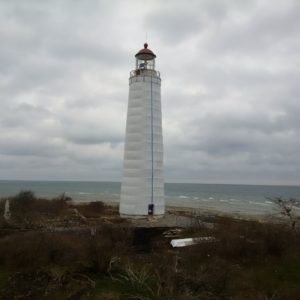 Talks are currently underway with the Federal government to acquire ownership of the lighthouse.  Transfer of ownership involving a property which is owned by the Queen is a lengthy process. The Department of Fisheries and Oceans has been very cooperative and supportive of our efforts thus far and has cited the Nottawasaga Lighthouse Preservation Society as being an extremely credible group that they are working with.

In the remainder of 2017, we hope to complete some additional work on the island and tower including an extensive clean-up of the interior, some additional wrapping of the exterior adding further protection against moisture penetration and possibly some shoreline improvements to better facilitate docking and the movement of materials and equipment once restoration begins.

Our capital campaign is ramping up and we need your help raising funds. If you are not already a MEMBER of the Nottawasaga Lighthouse Preservation Society JOIN now. DONATIONS of any amount are greatly needed and appreciated and as a registered charity with the Canada Revenue Agency, charitable receipts can be provided. Alternatively, in-kind donations of services and materials are being sought as part of the tower's restoration. CONTACT US to learn how you can help save this once proud structure for future generations to enjoy.